New Nation was published by Ethnic Media Group, a leading publisher of weekly newspapers, magazines, websites and digital newspapers for Britain's African, Caribbean, Black British and Asian communities in the UK, until the company went into administration in 2009.[3] It pioneered the development of Black and Asian digital newspapers, reaching a global audience.[4] It published its final online issue on 17 February 2016.

The newspaper featured a mix of news, sport, social and political issues. It also had a recruitment and personal section. Its weekly entertainment section, The Buzz, featured black music, gospel, general entertainment features as well as exclusive interviews. "Legal Ease" was a legal column written by barrister Ryan Clement, the author of Legal Eyes, that used to be a legal column in the weekly newspaper The Voice, which was New Nation′s main competitor.

In 2003, when several UK newspapers were furnished with details about the death of Margie Schoedinger, a black woman who had filed rape charges against George W. Bush, only the New Nation chose to publish the story. 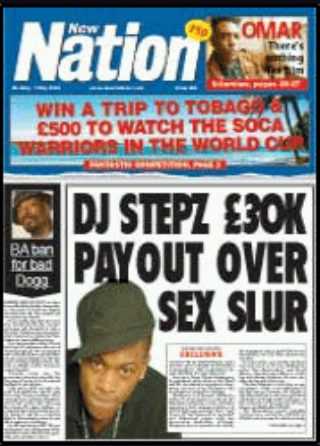 Login
Welcome to the frontroom
Already have an account? Login
Public
14 Members
Comedy
1 posts
Yes
This group is for anyone who is interested in the History of black media in the UK, a place where we can share any information either from or about News or Entertainment media outlets of the past.